When we arrived at our new house I walked onto the drive… I could hear yapping lots of yapping. I glanced over as I watched the back of a lady go into the house next door. A old lady and her corgies I surmised? (the area was majority of older people in retirement so it wasn’t a surprise)
I moved a few boxes and found the kettle things were put in rooms and the place started to look something like it belonged to us! I was not feeling well though and the seizures broke through.
During the next few days of sorting we met our neighbours  that lived down the bottom of the garden. They were lovely and later that day we also met the neighbours to the left.
One afternoon mum called me out to the garden to meet our other neighbours.(the lady and her corgies neighbour) Or not !
The ladies that stood there and talking over the fence welcomed us to our new home. Kara was 5 years older than me and Perl was a few years older than mum but we all hit off straight away. We stood chatting for ages and they were both lovely.
I heard a dog yapping and it turned out to be a jack Russell come collie…. A large dog whom I’ve grown to have a love hate relationship with! Kara was lovely she was at home as well as she has a health condition. We found many similarities of what we liked to do and so became really good friends. She lived with her mum and dad, a cat and the dog and a menagerie of birds.
We arranged coffee and a chat and the girl and me became soul sisters and are to this very day.
I was discharged home to my home with mum. Gavin was having to work so being in an hour and a half away on my own was not a good idea till i got on my feet. Although Gav was good in the hospital when i got home things changed. He became grumpy and wanted me to do things and go places and I knew I didn’t have the energy for . I still couldn’t see and i was scared. How would i be a nurse if i couldn’t see?

Mum had phoned the university and had my course suspended until i could return they said it wasn’t a problem and all would be ok. This put my mind at rest.
It took a couple of months before my sight returned, It was still blurry and i i get re-occurent blindness after a big seizure. but i got stronger and stronger. I was able to walk and finally i could see too.

I went back to life with Gavin yet things were not the same. I was not prepared to do the things that would push me as i was scared of ending back in hospital. Where as once we would travel for hours i was now scared to go more than an hour away from places i knew.
The relationship ended and we went our separate ways.
I returned home to mum who was more than happy to have her little girl back. She was far from happy with me moving out in the first place and to have me back at home also meant she had backup with my dad.

Dad is a whole new story, We have had a off relationship for as long as i can remember. The first memories i have of dad are of me being shut in a dark room with him holding the door closed. The memories that followed were not good ones either. I dont dwell on dad too much. i can’t change him, and i don’t think anyone could. Life is a fight without trying to win one i know won’t happen. We live our separate lives and thats how things work.
So anyway mum was glad to have me home.

On 28th August we were due to move. I wasnt going to be moving with mum and dad but overall I’m glad I did. Since moving I met new people, friends and had good times I would never have done if I hadnt moved.
Moving day was difficult for me despite this. Not knowing that good things would come of it I was moving to somewhere I knew little about and didn’t want to be.
I had made friends where I was, I’d grown up partly where I was and I felt comfortable. My house was lovely and I like it I was not keen on changing to somewhere else that was not homely yet. I’d moved from home to be with gavin and now I was packing boxes ready to go again.
Now I’m a Kind of person that would think nothing of going backpacking if my health was different so at the same time moving and packing boxes was an adventure that I also used to de-clutter and clear out. I threw out loads though my Disney collection stayed.
Moving day was difficult. I was not feeling great and I had already had a seizure that morning. Yet as I la on the last remaining piece of furniture I watched the removal men carry out our belongings and bundle them into a white lorry. I moved and the last piece went. As I sat on the floor looking around I was engulfed by sadness, I was overwhelmed as I remembered the happy times I’d spent in this house,

June and i had my acceptance letter arrive from University. Id applied for the nursing course as i needed to get out of physiotherapy. It wasn’t just my supervisor… i expected to have trouble in the future employment after this anyway it was i wanted to help more that i could as a physio.
September 2006 my new life started.
I met my new friends, my colleagues and work mates. My best friend was made here and our bond will be life long.
I flew through year 1. I found the work easy and i was in my element. I loved the physical work just as much as the university course work.
year 2 was not as easy but i still loved every minute. Even the all nighters! I also found love. in the form of another nurse . I was not expecting it and i would have never looked for it where i found it but a simple gesture of lending him and pen and then him returning it (very rare in nursing world…. pens normally find themselves lost forever) brought us tougher.
in my first semester i moved in with him. despite being a hour and a half journey away it was not that difficult as we both worked in canterbury so travelled together and life was good. I loved making home and even liked all the bits that went with that. I still had the odd seizure and they became worse if ill or that time of the month. In the may things took off and i ended up in hospital myself. Things were not easy but i got out of hospital and continued my course and caught up pretty well.
year 3. the start of Year 3 went so quick. in may MY new love and i went on holiday to America. It was my first holiday to a sunny climate. i was happy and excited yet scared as it was far from everything i knew.
I boarded the plane and my stomach sank…. was i doing the right thing?
And yes don’t worry there is a life after diagnosis…. it’s just a little more complicated than before! but we fight it disney style : with positivity and sparkles all the way!So for the next couple of weeks life continued. I went to school and all was ok although after mum told the school I was banned from using the PE equipment as I could fall off!. My mum, had to learn how to use rectal diazepam which would get me out of a seizure if it didn’t happen on its own. I was too young to know or remember too much of the details. my life’s roller coaster was going at full speed and downwards.Life again continued on its merry way and apart from a few seizures I didn’t take much notice. As a young child you take things in your stride and grow to live with things. I wasn’t to know this wasn’t normal!. My mum on the other hand had to deal with the stigma of having a child with epilepsy. I now know after mum telling me that some of the parents told their children not to go near me because I had epilepsy!!! If any of those parents are reading this blog now…. shame on you but thank you because you are some of the reason I am the strong person i am today and am campaigning form more awareness.
At the age of 7 I moved.  This was great fun as we actually moved on 24th November (my birthday) not only was it my birthday but it was snowing too! great fun for me but not so for the move.I was on a bit of a buzz as Topper and I (topper being out toy poodle)  were staying with nan and grandad who had made me a cake and brought me the biggest polly pocket world i’d seen… I was loving it.  I had to change schools and life was better. We were nearer to the rest of the family and I was going to the same school as my mum and cousins had been to. I met a new cousin while at school that i didn’t even know about so life was great. Then things changed Although i loved school, I was worried what the people, and my new friends would do if the seizures (fits as i called them) reared their ugly head. I would had to face another set of kids with the same kinda questions as the last. It didnt happen and I ended loving my new school, friends and life much better than my old school. 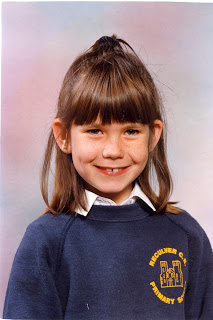