seizures have Generalized electrical activity which affects the whole brain from the beginning of the seizure. 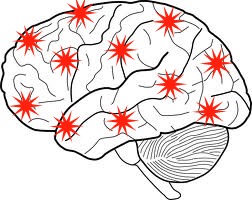 Generalized seizures include; Absence, Atonic, Tonic-Clonic, and mayoclonic seizures. They all have variable symptoms.

Absence seizures are also known as petit-mal seizures. They are a form of generalized seizures which mainly occur in children. However adults are affected too. There are 2 types; Typical and Atypical.

During a Typical Absence seizure:

During a typical absence seizure the person is unconscious for a few seconds (normally between 10-40 seconds) They appear awake but daydreaming which is why they can be hard to spot.
The person will suddenly stop what they are doing and appear to stare into space, trance like. The person may make chewing motions, fiddle with items of clothing, make movements with their hands or flutter their eyelids. During this time the person is totally unaware of their surroundings and is usually unresponsive.  When the seizure ends the person returns to what they were doing  – normally unaware of the seizure. However a known epileptic will realise if they were in a conversation, in a classroom, listening to tv/music etc as they will have missed/ skipped a section. This can make learning difficult as some people can have many of these seizures a day.

During a Typical Absence seizure:

They tend to start more slowly and last for a few minutes. The person may fall over and be confused for a short time after regaining consciousness. This type of seizure is more common in adulthood.

Atonic seizures are also known as ‘drop attacks’. The persons muscles suddenly relax and become floppy and so the person drops to the floor. They may injure themselves as they fall (usually forwards) and normally hurt their head and face.

The seizure is very quick and the person can normally get up again straight away. They are not confused afterwards but may have injuries from the fall. People who have frequent atonic seizures may need extra safety precautions such as protective headgear.

Tonic-Clonic seizures or grandma as they are sometimes called are the convulsive seizures that everyone thinks of when they hear and think of Epilepsy. This type of seizure has two phases.

The person looses consciousness quite quickly, falls if sitting or standing. The muscles will suddenly tense – often causing the limbs to either stretch out or pull in towards the body. The person may cry out as air is pushed out of the lungs. They may bite their tongue or their cheek.

The person will start jerking and convulsing caused by their muscles contracting and relaxing rapidly. This stage can vary from person to person and depends upon where the electrical activity is . The clonic phase can range from exaggerated twitches to violent vibrating or shaking of the body.
The eyes typically roll back or close during the seizure. Breathing may be affected, become difficult or sometimes stop. Skin may change colour especially in the face and lips, and may be pale or a blueish colour. Some patients may loose bladder control – this isn’t common but does happen as all muscles can be affected.

After the seizure the muscles slowly top jerking and the person relaxes. Breathing and skin colour return to normal in a few minutes. The person will feel confused, achy from the muscle workout. They may have a headache, be sore and may want to sleep. People recover at different rates so it depends upon the person.
Post ictal refers to the stage after a Tonic-Clonic seizure. Some people will be confused and can have memory loss. This can last minutes to hours and sometimes after many seizures it can last days.

Mayoclonic seizures are brief but can happen in clusters. They can cause the whole body to jerk however more commonly it is just in one or both arms, sometimes the head and legs can also be affected. Although it may not seem like it the person is unconscious for a very brief time – although brief they can cause a lot of frustrations such as spilling drinks, and similar accidents.

No recovery time is needed however and although the muscle may ache there is no tiredness or other recover time required.