Partial seizures, also known as focal seizures have electrical activity which affects only part of the brain at the beginning of the seizure. 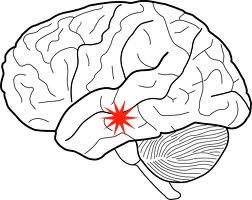 During these seizures you may be alert or totally unaware of what is happening. It all depends where the area of the electrical activity is. For examples of the symptoms of partial seizures in different areas of the brain please CLICK HERE.
With partial seizures the bursts of electrical activity stay in that area of the brain. The most common areas are the temporal and frontal lobes.

There are 3 main types of partial seizures; Simple Partial, Complex Partial and Partial with secondary generalisation.

Simple partial seizures typically last for 20-60 seconds. There is no loss of consciousness and the person is fully aware of what happens during the seizure. Anyone can have this type of seizure, just like all seizures however it is more common in those who have had head injury, brain infection or a stroke. However most of the time the cause is unknown.

Some common symptoms of a simple partial seizure are:

The outlook for people with simple partial seizures is fairly good as the majority can be controlled with medication.

Complex partial seizures typically last for 1-2 minutes. They may have a aura (Warning – typically a sensation in the stomach or chest). The person will be unaware of their surroundings and have partial loss of consciousness. They may remain frozen still or wander and be confused and sleepy after the seizure. They may not be normal for several minutes to hours after the seizure. Anyone can have this type of seizure however just like simple partial seizures they are more common in people who have had a brain injury, brain infection or a stroke.

Some common symptoms of complex partial seizures include:

Triggers for both simple partial and complex partial seizures are:

There is no one specific treatment option however the outlook is reasonable positive with many treatment options such as medication, vagus nerve stimulation, dietary changes or surgery to remove or separate areas.

Some people with Epilepsy have a warning when they are about to have a tonic – clonic seizure. This warning is called an ‘Aura’.
The aura is usually brief and will normally follow the same pattern every time however the person may not get an aura every time they have a seizure. The aura/ warning itself is in fact epileptic in electrical activity and is a seizure itself. A partial seizure. Once the electrical activity spreads to both hemispheres/half’s of the brain the tonic-clonic seizure will begin.

These auras can be useful as they give the individual time to get to a safer place or alert someone they need help however from the point of view of someone who experiences these at times… they can be very scary as you know you’re going to have a big seizure and there is nothing you can do to stop it.