Today I became a published epilepsy advocate. After an interview I gave to epilepsy action they wrote an article and it is published in this months issue

I am so proud of myself for getting this far in the world of epilepsy awareness in 6 short months of actually speaking out about it. There is a lot further I want to go but for now I leave you with some happy images of me and my magazine article.

Abseil day was a amazing experience. I woke up really tired, the weather was wet and cold 🙁 oh no I thought typical !

We got ready, I donned my epilepsy awareness Tshirt and purple ribbon makeup and grabbed all the cameras… We were off. Kara was due to be going with my friend who is also a photographer and was coming to take professional pics. My other friend tink was going with daryl (a friend from dads work). I couldn’t get it round my head that all these people were coming to support me. I was so shocked of how many people wanted to support me (or maybe they just wanted to see me 200fr up dangling on the end of a fishing line!?)
Ok it was more than a fishing line but that’s how it felt that high up!
We all arrived.kara had made everyone team Jo badges to wear! I was amazed!
They were fab. 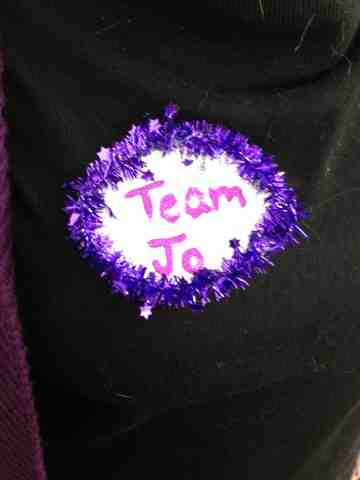 I went to register and I got my sticker which I put on my shirt. This told everyone i was a participant. 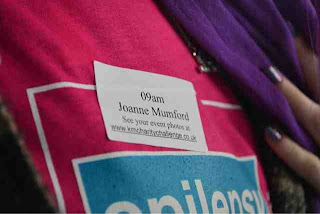 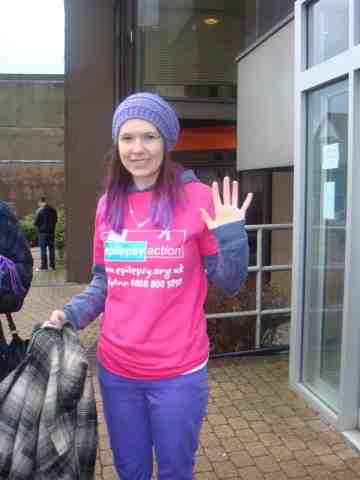 Next we were taken round into a car park, I separated from my friends and was hooked up to a harness. The gloves I were given were far too big and each participant had two pairs to wear each! 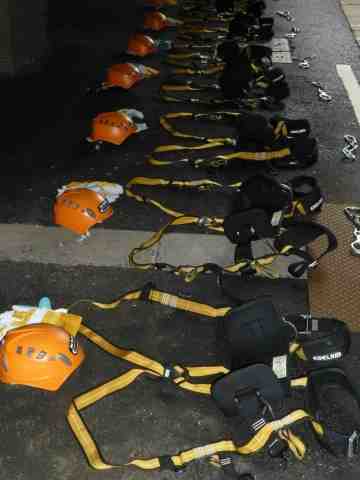 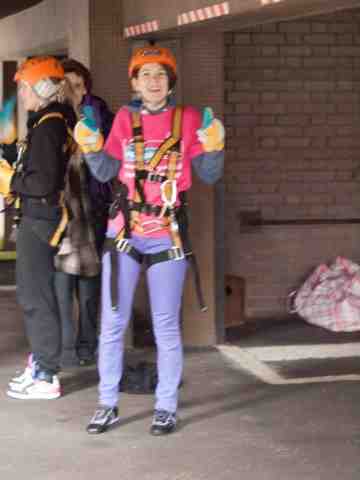 We were then taken up in the elevator 15 floors. Then two flights of stairs and another half dozen steps onto the roof. This part was enclosed a little. We had a photo taken.
Then we had to climb two ladders walk across a partition and up another ladder. We were then ready to abseil.
I chose to be feathered to the rather hunky looking ex sas soldier! Wonder why! Ha ha
Everybody had told me the worst part would be going over the top so I was really nervous. I did exactly what the sas soldier told me to do though and it was fun. The view was amazing and I couldn’t help but look down. My feeling was : if I’m going to get the most from this experience I want to see the view!
Once over the edge the hard work started. We went down in twos but the lady who I went down with Sandra had done these challenges before… She was also a bit heavier than me so the rope lowered her down… It wasn’t till the sas man told me I would have to lift the rope up because I was very light that I done that and started to move!
I continued on my way down, soaking up the scenery but getting extremely cold . I am not the type of person that does well in cold. I was shivering and my hands were numb… I was really starting to wonder if my hands would hold me because they were so cold. I continued on my way down… Sandra was gone. Either I was slow or she was really fast! I stopped for a minute I looked down thinking I was nearly at the bottom… Wow big shock…. I was only 1/4 of the way down. I had way over half way to go!
I was slightly worried but knew I was in safe hands I slowly and steadily continued on my way. There was a little squee when the wind we me off the wall and I scrambled my feet back onto the vertical surface again but apart from that he decent went well. 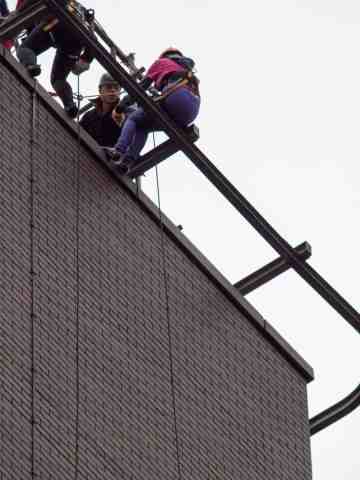 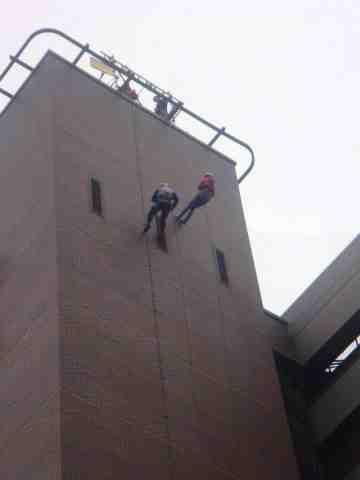 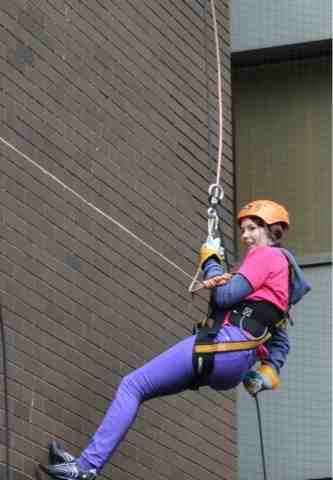 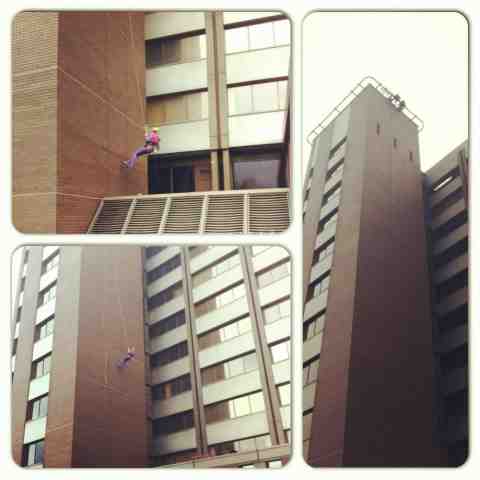 Eventually I did reach the bottom, a big cheer from all my friends, I then disappears behind this wall where mum as was waiting. I started to feel dizzy as my feet reached the ground.. My only working eye went blurry too, I was so so cold I couldn’t stop shaking. I was pushed against the wall to keep me steady while the guys untied me from my harness. Another guy wrapped me in his coat and gave me a drink. I sat on the steel staircase and warmed up. 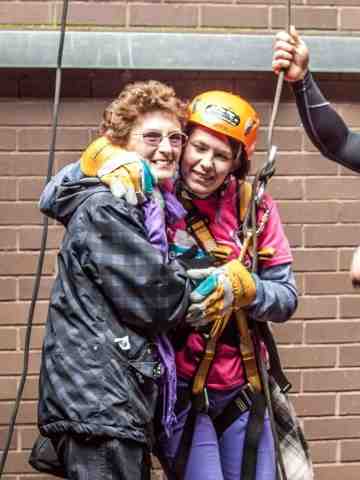 Once warm (less cold) mum and I went to meet everyone… I had to go back to the desk and collect my certificate. Upon doing so Claire presented me with a rosette and tiara! It was amazing. I cried, all emotions running through me. 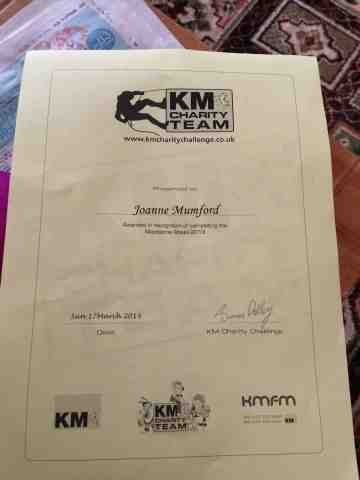 We all piled in cars and went back to mine where there was hot coffee, tea and nibbles. It was lovely to have all those people close to me on one room. I felt honoured and privilaged to have so many good friends who supported me and continue to support me. 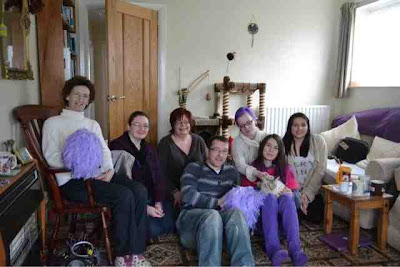 That day will never be forgotten. It is one of the best times of my life.
After the abseil I had two newspaper mentions and was on the local billboard I was also on line and I had overwhelming response to my video which I will post on the next blog my total fundraising was £720 ! 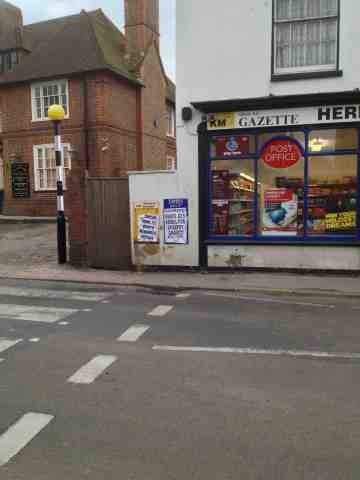 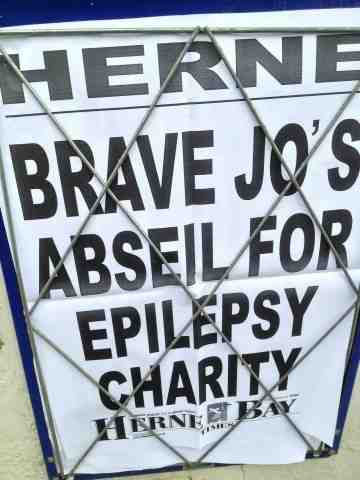 One of my new years resolutions I made while laying in the resus unit at the hospital was to raise as much awareness about epilepsy as I could and to raise some money for epilepsy research. This is a resolution I intended to keep.

I met some people online this year and lots of groups about epilepsy, It made me even more determined to do what I wanted to do. I started making jewellery with purple ribbons as I was going to sell these for purple day. Then I had an opportunity to do something amazing, stupid maybe and raise money. I had the chance to Abseil 200ft ! despite mum not wanting me to I booked and took the bull by the horns! I was excited but terrified at the same time. Ive never been up that high in the fresh air before so had no Idea how I would react. The date was set…. 17th March 2012 !
A few week into my raising money and sponsership campaign I had a text from my bestie friend who I met last summer…. Linda. “what date is your abseil?” I replied… the next text “Jade and I are coming down to watch!” OMG OMG OMG My best friend tink had already said she would come down… now linda too I was so excited. The next couple of months were crazy, advertising, planning and raising more money than I dreamed of. I thought Id be able to raise £50 maybe £100. Well when I reached £200, then £300 then £400 I was shocked !
Linda and Jade were to come down on the friday and then I would be staying at the hotel with them and then saturday would be a girlie day and sunday abseil day !
Friday was amazing, Id not stayed away from home in 5 years, unless you class hospitals !
The friday arrived, Linda and Jade arrived and all I can say is we had a amazing girlie weekend ! I am so so greatful to them for coming, It made my year! Im so lucky to have some brilliant true friends.