If theres something I’ve learnt and thats life is precious. Epilepsy does scare me sometimes and so do the cluster headaches. I try not to show it, i don’t like to and I hope that people wouldn’t know unless they know me wouldn’t know what my life is about just by looking at me… why would they unless they spend enough time with me.   This time really did scare me. I had taken a picture half an hour previous to my fits and the next day when i was out of hospital i looked at it and there is no sign of what was to come. Like a time bomb waiting to go off?

The next few days I rested and watched so many films that I would be great on a tv quiz show!
Monday I was due to go to art class. I really wanted to go as not only was I bored but I wanted to start on my big canvas. The problem was the art class was at the craft box where i had last been and ended up in hospital. I was embarrassed and scared to go back. Being the stubborn person I am (even to myself) i thought it was something i had to do… I thought if i didn’t i would never go back. I Picked up some flowers on route as I felt that Tory really deserved them she helped me that day more than I think she realises.
Mum dropped me off outside and I went in I was shaking, not only because I felt awful but I was so embarrassed. I met the other lady who was there that day but I had no idea how much she saw, if she knew or what as I was too out of it that day to know. She said Tory wasn’t there… My heart sank. I immediately started to feel scared as I knew Tory better and I was so unsure in my own body at the moment. I felt so alone.
I was given a task to do from the art teacher and just sat down and done it… i was shaking inside and my head was pounding. The infection had started to take its toll and my kidney was a constant pain in my side. I finished the task and was actually quite pleased with it. Now for the big canvas.
I started on the work but was so tired i was nearly in tears. I was scared and I felt I had to leave and quick. I made my excuses and left.
I walked up the road, stood alone, still and was in tears what had I done I should have phoned mum before I left. Now I was alone in the street and no help or security. I called mum straight away and she came down to get me.. I when home and cried. What a baby I though… yet now I felt It would be more difficult to go back.
Life was bad again and I was so so upset and tired.
The next day I got up and brushed myself off and told me not to be stupid I went to the craft box. I had to finnish dads plaque I was shaking when mum took me down. I wish mum would go but mum said no and made me do it alone. So i did. I went in and Tory was there. Relief yet embarrassment and I still couldn’t stop shaking.
I done half of dads plaque but was too tired to do the rest. Kara needed to come down that afternoon so i went home, had lunch and slept. 3:30 claire and i went back and  finished the plaques. 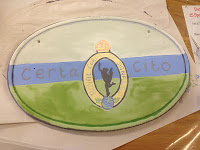 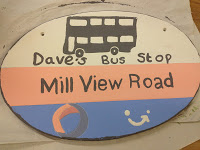