This is just a quick entry to explain what happened today and why I’ve not really spoken to anyone and said yeah drs fine, 1) because i’m too exhausted and 2) because I don’t know whats what yet.


Well today after a night of head pain and added noise of a cold and windy night and out back gate banging in the wind and hence very little sleep I toke to a day at the dr.’s…. little did I know this at the time. The 1hour job ended up taking 4 hours! A lot of waiting was involved and Im now typing this after having a sleep and I still feel exhausted!
I left the house at 8:45 and managed to get my appointment with the dr, We just went over what had happened over the past couple of weeks and made some minor medication adjustments and then was sent for a ECG. Last time I had a ECG my heart rate was slow and as I am now on the new drug which can cause problems with the heart they are keeping and eye on it. I was really pleased when I asked the nurse from behind the curtain if my heart rate had gone up and she said yes… I thought this was going to be far better than my last appointment. How wrong could I be.
I got dressed and the nurse said she would show the dr. Well it turns out there was something wrong with the ECG this time… I was ready for it though as Id been given a copy of the ECG which read “abnormal ECG”. I was tired, cold, my head and feet hurt and I was fed up with waiting !
An hour nearly passed in which time all things wonder through your head. Finally the nurse came back and blurted some stuff which I have no idea what it meant “A Junctional rhythm with non-specific ST and T wave abnormality – Abnormal ECG”which was pointed out to me on this paper followed by a the doctor wants you to book another ECG friday afternoon with an appointment to see her afterwards. Well i though i’d never get an appointment for that soon and for both at the same time… well actually I did which is unheard of at our surgery… normally I’ve been booking my ECG’s a week and a half beforehand. So mum was standing looking kinda freaked out… to be honest Im not overtly worried, Yes I’ve had some chest pain but this isn’t anything new from my last ECG and nothing bad has happened yet so why worry what a few lines on a bit of paper say!. Friday is just 2 days away so we will find out more then. For now i’m not thinking about it.
Needless to say being at the dr’s for that long was exhausting, I’ve had a little sleep and now plan a long hot soak in the bath.

Other than the escapades of today things have been slowing down a bit. The headaches are easing although still getting on average 3 attacks a day. Im now able to concentrate a bit more on the fundraiser and am making awareness ribbons and other things ready for 19th October. Its all quite exciting as i’ve never done anything this big and organised the lot before. Its going to be really good though and Im really hoping people turn up so we can raise lots! 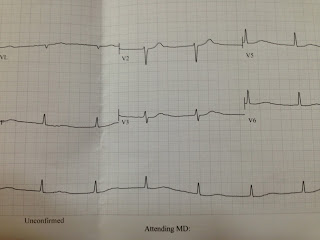 Well Friday I had my repeat ECG. It was a bit of a nightmare and I’m putting it down to being Friday 13th even though I’m not really supersticious. The surgery computers had crashed and that included
the ECG machine. They finally got half of it up and running so I was able to have the test done. The dr came in while I was having it done as she wanted to see it. It turns out that the on previously had shown I had first degree heart block. The dr was hoping that the heart would recover and only do this occasionally and recover in between which it looks like it does. At least I know know why I get my chest pain every now and then however good news is that so far I can still stay on the pills but need close monitoring.