After the blip i had started living again.
I went to the craft box more and I went out with matt more, I was more confident and was going out with some other friends too.  I started planning things further away and life was good. I was still having the seizures but they were less severe and I was at about 2 a week and I knew to avoid my period time. I started brushing up on my nursing skills by redoing my online training and had passed them all. I was getting ready to go back and I was treating every day as a bit of a holiday. I still went through bad weeks where my cluster headaches would be bad and i would need the oxygen but i thought that iId still be able to go back to work even with that.
To bring myself into the real world again I started taking my little cousin milly out for day trips. Things were good i was living, making plans yet this time still being reserved.
June 16th 2012

Things were good !  the last 2 mondays I’ve been going to a art class at the craft box as well and I’m still taking Milly out on the occasional weekend.
The last week i have been painting a plaque for dads fathers day pressie. Ive designed it with both his loves in mind. On one side I’ve got his regiment details and badge and on the other his own personal bus stop. On and off I’ve been going in and doing a little.
Last Thursday I was in the activity box with Kara (she was doing a similar thing for her dad but a gardening design).
Over the few days leading up to last thursday I had been feeling a little under the weather I had noticed my headaches were stronger and I had been having a lot of absence seizures. I hadn’t told mum how bad i was feeling as she had been unwell the last few months and I was done with worrying her about me. She done that way too much. Things were on the up so I thought I could cope.

Thursday was going to be our finishing off day. We went in at 10am and painted away and chatting about the usual rubbish we chit chat about. My head was getting worse so i took a couple of my stronger pills and then kara and I took a break to go and get a cake from the nearby cake shop. We came back and had a cuppa to go with it and continued to paint. Half an hour in and i felt strange, My head was bad and i was getting hot I went outside to get some air and as i went down the steps i knew something wasn’t right. I got to the door and it all went blank. I woke up laying on gravel feeling very cold. The lady who owned the craft box (luckily a ex nurse so wasn’t to badly freaked) was holding me telling me where i was. I felt awful and so so embarrassed. Why, How not again were my thoughts. I knew i wasn’t free from the beast but i felt I had gained a little control and here i was being proved wrong. (life with epilepsy is always unpredictable)

The next few hours are really blurry as from what I’ve been told i was in and out of seizures a lot.
I remember getting up and going back into the warm as sitting on a stool. My trousers were covered in mud as was my feet and hands. tory (the lady at the activity box) washed my trouser leg with a cloth and I was holding onto a roll of bubble wrap. I felt really ill and the sensations i were getting were odd as I didn’t normally feel them this strong once the seizure had passed.
The next thing I knew I was on the floor again. this was seizure 2. this apparently continued. I can’t remember what was happening yet i know people were there I could hear Tory’s voice and then mums. I could tell the difference between Tory’s hand and mums as Tory’s was smooth with short nails and mum had boney hands with long nails. Voices were distand and under water. i felt so so cold. I cuddled in a blanket and can remember mum passing me the oxygen. I was trying so hard to stay awake yet i was so tired. I wanted to go home and so tried to get up and get up the stairs. This failed as every time i got up I had a seizure. I can’t remember this part but this is what I’m told.
The next 2 hours are blank as I got taken to hospital and woke up in the resuscitation room with a needle in my arm wires on my body and a drip hung in position. There was a nurse and doctor  asking me what happened… fit? i said groggily?  the drugs kicked in pretty quick and it turned out i had a kidney infection which probably caused the flare up, it didn’t make me feel any better though i couldn’t believe id had a fit while out, this hadnt happened in a couple of months (ok i rarely went out too much nut hey) . i was so so embarrassed.
My head was pounding but the oxygen helped a little.
I was desperate to get home and our friend was there as huge support to mum. Persuasion meant they did let me home later that evening with a large dose of antibiotics and instructions. I was so relieved. I got straight in bed and cuddled in my blanket with magick and the oxygen. It seemed that too long of the oxygen and i would start feeling really rubbish again. 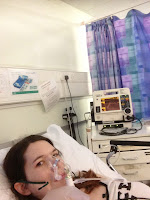 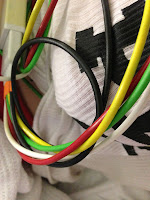 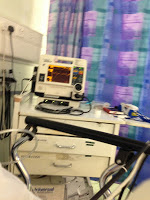