Halloween is one of my most favourite times of the year. I love the spookiness, the food and autumn nights and it gives us adults a chance to make up and dress up without getting funny looks ! Just the last couple of years Halloween has been fab in our town. There is a group of people who have got together and organise a Zombie craw and this year (the 2nd year) we are also having a zombie ball.

I this year I was going as a zombie sleeping beauty, Kara as a zombie teacher and Mark and his daughter a zombie man and zombie school girl.
The run up to the even was great I loved dressing up and making up and it was a real buzz. The crawl was to be longer this year and i was also asked to shake one of those buckets where people put money (the events these people do always raise money for some charity). Anyway the night came and we were all made up and ready to go.
It was FREEEZING ! oh boy it was cold. Mark, nic, kara and I all went and and after many photos the crawl begun. by the time we got 3/4’s round i felt it was literally a crawl i knew it was supoesto be longer than last year but compared to last year it was a hike!
We all returned to the hall where the ball was to be held safely, exhausted and freezing but the night was young and we soon warmed up.
The event was a disco and a dj with all the gear was on the stage, the music was loud and fab. I hadnt gone to an even like this since a ball about 7 years ago. I had checkedd before booking that there would be no strobes that would set my seizures off  and  there wasnt… the night went really well and we all had a good time.
For once I felt normal 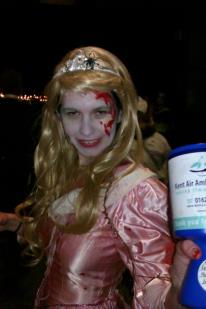 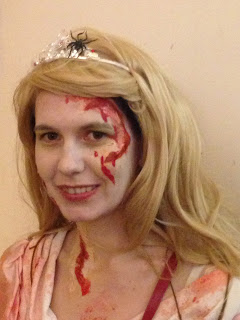