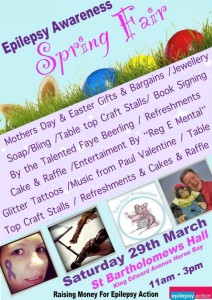 The Epilepsy awareness spring fair on march 29th went really well –  I cant say I wasn’t nervous or not feeling at the top of my game cos I wasn’t . The weeks of preparing had caught up with me and i was tired, in pain just about everywhere and had had a bad night previously. Id picked up some cupcakes which were donated by sweet dreams cupcakey (Click Here to visit their site ) and then came home to a massive cluster attack followed by seizures but I did manage a little sleep. Despite this however I had things which are worth their weight in gold – my friends and family ! yes despite the previous weeks of torment and pain dad was also there to support me (his first team jo event!) Mum, dad, Rolf, Larry,  They were amazing, packing up their cars and vans with bric a brac, cake, soap, mums card game and my suitcase of pillows, blankets, drugs and oxygen which I pretty much need for a day out anywhere!

We loaded the boxes inside, or rather my friends did while I got in the kitchen and tackled the urn which needed more tackling than one would think. Finally i got it plugged in and filled up so we could all get a much needed cuppa coffee down us – followed with a bit of cake ! it was well earned cake. 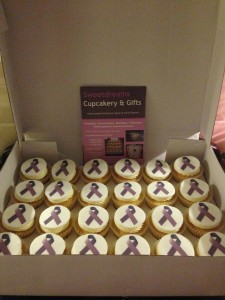 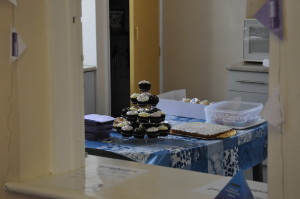 We set the hall tables out after moving a staggering amount of chairs surplus outside ! the hall was smaller than we thought at first (later on we found 2 people didn’t turn up which meant i would have arranged it differently however hindsight is a wonderful thing!)  Still we managed to set the tables up – put the labels out id printed with names of people and their stall name so there was no mix ups on tables. 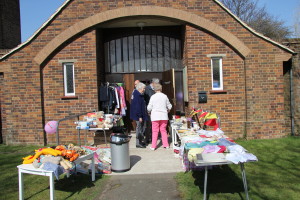 I set out a corner for the entertainment (my lovely conductor of Kent Coastal Concert Band) Paul Valentine playing saxophone and the upbeat, energetic Reg E mental the children’s entertainer with his magic and mystical tricks.

Then we started on the actual hall decoration. Claire and I had got streamers and purple lanterns and made ribbons for the windows – the hard job was putting them up.  Rolf and I strung streamers criss, crossing the hall and I sat dad down with the task of cutting the others to length to go all around the walls…. afterwards it was quite effective! The hall was bright, purple and full of tables. 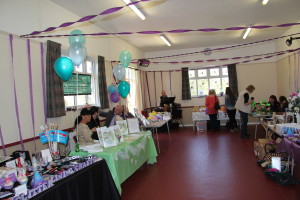 Pauline and claire arrived and Pauline started organising the kitchen to her liking as well as the 100 cupcakes which had been donated via another really good friend Hellen (so grateful) and Pauline’s own cakes. Claire set to sorting her jewellery stall and next Rolf and dad blew up the many balloons and put them around places. 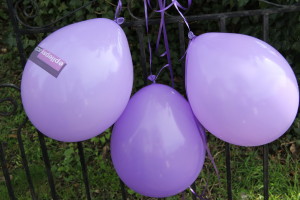 People started turning up to sort their stalls and then it hit that I had still got to sort my stall and the epilepsy stall. I started organising my stall which was more stressful than i thought – previous events I had done and been to mum had always helped and so it wasn’t such a manic panic… yet she was doing other things and I had worn myself out doing the rest of the hall so my own stall got on top of me bait – however I got there after a few struggles and the hall and my Glitter lining crafts stall was set up. 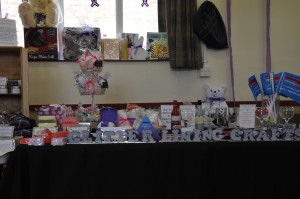 I had a glitter tattoo applied to my face to advertise more and within the next hour everyone was set up. 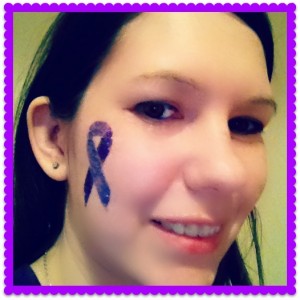 The weather was bright and sunny and the people came out to support us,  it was lovely to see people making themselves in groups around the grassy areas outside in the sunshine talking and listening to Paul Valentine. 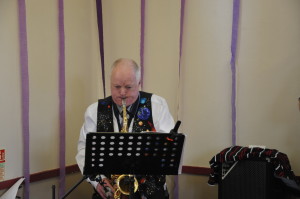 There was also a few impromptu clarinet duets from Rolf, Sue and I (rolf on his soprano).. 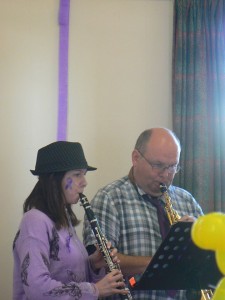 Reg E mental went round the hall and entertained the children and adults with his on the spot magic and outwardly flamboyant personality which you cannot help but love.

Refreshments were served and people were indulging in the lovely cakes on offer.

Faye arrived and had her stall set up to perfection –  It was her first public book signing so was extra special day…and she also donated a percentage of each book to Epilepsy action via the spring fair. 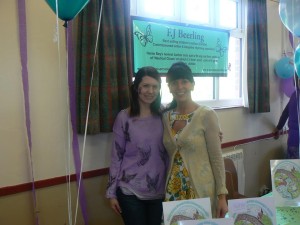 During the event it was lovely to have so many people come up to me and chat – id met them online, via groups and one even via twitter and it was lovely to finally meet these people and hear their stories and the things we shared. 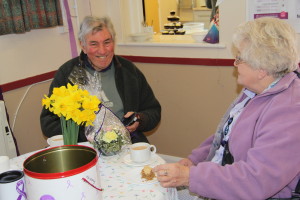 The raffle was a huge success with many people winning the lovely prizes that were donated.

The event has been commented as a great fun day out by many and ive had many good comments of how well it turned out and was organised. 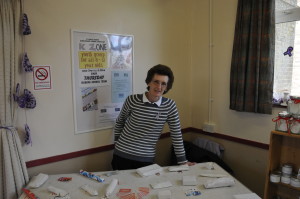 Mum on her Card-tastic stall 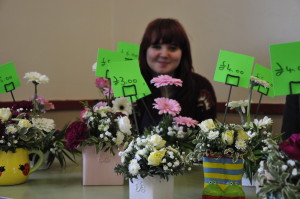 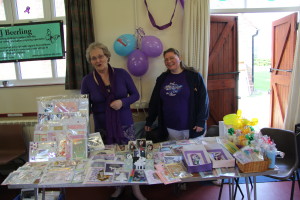 Jill Goldfinch with her handmade cards 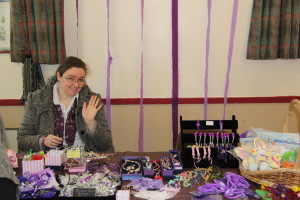 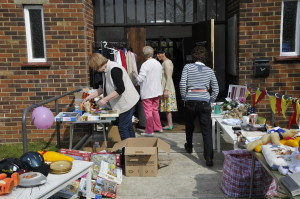 Pat and Friend Selling well on the outside bric a brac 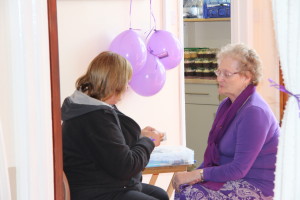 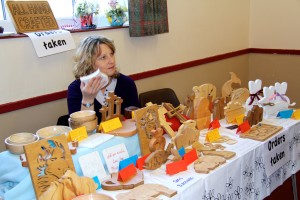 Id like to thank all those who helped make it happen, donated prizes, bric a brac, services or cake !

Also a massive thank you to team Jo. You are the people who gave me confidence to make such an event happen, made me believe in myself. Im really glad everyone had such a good time – the total of proceeds made on the day is over £450 however more money is still being collected and a grand total will be announced on the website and Facebook page once the final count has been done. The money collected is going to Epilepsy Action.

For more information of future events or what is going on with my epilepsy fundraising and awareness project please keep visiting this website and also pop over to my Facebook Page.